Here at Countryside Farm, we raise happy animals. Happy animals that spend the majority of their lives outside wandering and foraging in our pastures and woods at their own leisure.  On our 7-acre family run farm, we raise, process, and sell duck, chicken, goose, guinea fowl, rabbit, pheasant, heritage pig, and wild caught hog. We have an extensive charcuterie line of sausages, rillettes, pates, terrines, mousses, bacon, etc. and source to local foodies and high-end restaurants in the area. Though we are not certified organic (yet!), all of our meats are raised in an herbicide, pesticide, and chemical fertilizer free environment, with their natural diets supplemented with a locally milled custom grain mixture that is free of growth hormones.  We process all of our poultry on-site in our state licensed facility and our large animals at a local custom abattoir (French for Butcher Shop, ooh la la).

Here’s the Who Who of Countryside Farm: 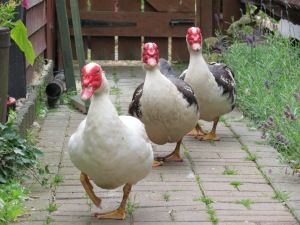 What: Muscovies are easily distinguished from other breeds of duck by their larger size (male Drakes) and by their faces, which are devoid of feathers, but instead show a bright red, flashy caruncle. They come in several colors, predominantly white, but include much more iridescent black for Drakes and can include buff, brown, chocolate, lilac and blue, as well.. Although relatively silent, male muscovies produce a low hissing sound and the female have a short, weak “quack.” They are a  docile, placid, and sedentary duck. They take it easy, these ducks like to chill out. No fast movements from these easygoers..

Weight: Large Drakes can weigh from 7 to over 10 lbs. while Hens weigh in at half, or less, of their size, usually 3-5 lbs.

Where: Its chief breeding range in the wild includes Central America and northern South America. In North America, muscovies are found locally in Mexico and a small population inhabits southern Texas. They are a naturally large bird with perching flight ability, do not have established migration patterns, and are able to be found domesticated around the world. Around Countryside Farm they can be seen hanging in small flocks, or kicking it solitary. Nested in the brush or splashing around pondside, they’ve got the biggest section of land on the farm and we think they know it. (Known Associates: Geese, other ducks)

When: Muscovy ducks feed on the roots, stems, insects, leaves and seeds of aquatic and terrestrial plants, including agricultural crops. This natural foraged diet is supplemented with a buffet of all natural locally blended feed that the ducks can peruse and snack on at their leisure.

If a wild Muscovy Duck was pushing for longevity, he could have a 7-8 year lifespan. Ideally Muscovy Duck is ideal for the table around 12-13 weeks, and this is when we harvest.

Why: Why switch to duck? Try duck if you’re looking for a rich, full-flavored, meaty, but leaner red poultry meat. Choose duck eggs if you like rich, creamy eggs in the morning, or anytime. If you’re a first timer…Welcome! Taste duck. You won’t ask again. 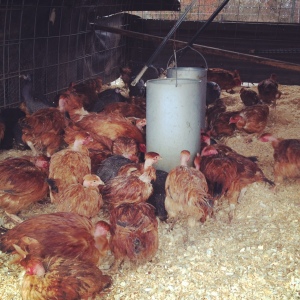 What:  These friendly, adventurous, and rather gentle chickens feature a single bright red comb atop their head, are naturally naked of feathers on their neck and vent, and have less feathers than many other breeds of chicken, making them better adapted than most of us to this Texas heat! Back in the day, these chicken were mistaken for a cross of Chicken and Turkey, giving them the wrongly accused nickname: Turken. They are a good looking Hen and Rooster set, often being a variety of colors including White, Black, Buff, Silver and Red. The Hens are said to lay a respectable number of brown eggs.

Where: The origin of this breed is uncertain but  was largely developed in Eastern Europe.  Relatively rare in the US, Naked Neck are very common in Europe, especially in German and French cuisine. Around Countryside Farm, they can be found…well…everywhere. Perhaps roosting and sharing egg nests, roaming and climbing any and everything, jumping fences to visit other animals, and throwing chicken parties in the Farmer’s yard when the gate is left ajar. (Known Associates: Geese, Duck, Pig, Humans, Anything, Anyone)

When: Our chickens are grown to an age between ten and twelve weeks. The more natural growing period results in superior, old-fashion tasting chicken with a deep, rich flavor our grandparents would recognize.

Why: As a dual purpose chicken, the Naked Neck Chicken is great for both egg laying and meat. Because our chickens grow slower they do not suffer from the numerous health problems that Cornish Cross chickens (the grocery store standard) experience.(Cornish Cross are bred to reach market weight in a short 6 weeks). We like our chickens happy, stress free, and eating only when they want to. They like it that way too.

What: American domestic pigs. The Duroc pigs are red, big boned/large-framed, and are a very muscular pig, for never having pumped iron a day in their lives. These pigs seem to get up on the wrong side of the pen too often, and can be known to have a bit more aggressive behavior than other breeds. New Hampshire pigs are a stylish, mostly black pig, with upright ears, and a fancy whitish/pink belt around their midsection; with this belt stretching to include their front legs. Hampshires are a happier, more easy-going breed of pig, and the sows (females) are known to make fantastic mothers, making them the prize to every casanova in the mudpile

These particular Heritage breeds of pig are fast growers, grow quite large, and make for mouth-watering pork products. They are a highly intelligent animal, and with just a little inclination, seem capable of moving anything in their path.

Where: Heritage pork breeds have been popular for generations and generations, and claims of origin stretch from coastal Africa, cross-breeding of Red Jersey and Duroc specifically in the early 1800’s, and even back to Columbus’ early trips to the Americas. The Hampshire breed is  the oldest, early-American breed of hogs in existence today. A particular breed qualifies for the label “heritage”  because we can trace them, as a distinct breed, back to 1827. Wherever they may have got their start, these pigs were raised outdoors on mixed-use farms, and over time were able to adapt to all seasons and weather conditions. As farmers moved to varying locales, many of the less adaptable breeds died of,f and the Heritage Breed became America’s OG pig.

Around Countryside Farm, these pigs can be seen making a mess of their room (it’s always a sty!), tipping water pails to make mud holes, scratching on trees or fences, and rolling around, napping, or snoring in the sun. Yes, they really snore. (Known Friends: other Heritage Pigs, and the occasional guinea or chicken who’s trying to take over their land)

When: These free roaming pigs forage on anything they’d like, such as, plants, bugs, worms, fruit, etc. We offer up all kinds of extras to these pigs, including boiled corn, locally obtained spent grains, and an endless supply of all-natural compost gathered from local businesses. We won’t ever make our animals finish everything on their plates if they don’t want to (no one should ever force feed animals!)…but it seems like these piggies love it all! Endless appetites I tell you! We harvest these pigs at many ages, from the tender suckling piglet to the fully matured 400+ lb. range or bigger!

Why: Heritage breeds of pig produce meat that is darker, more meaty, more tender, and more marbled (depending on the breed and cut) than what is commonly available today. These are all highly desirable qualities in cuts of pork so we shout to Farmers from the ol’ days, thanks for protecting them!

What: A wild ancestor of the domestic pig. Wild boar have a thick and coarse double coat of fur, that consists of a harder, bristly top layer, with a softer undercoat beneath it. Their build is more compact, high and wide at the shoulder, with a tapering to the hip. They have larger heads and much longer snouts than domestic breeds. The typical color is for a wild boar is fully black, but they can have any color, in any pattern, generally depending on the individual’s location. The Wild Boar is an extremely adaptable animal, eats almost anything that will fit in it’s mouth and not only runs fast, but also swims well too. As they are wild, they are much more aggressive than domestic breeds. They can be downright mean or scary. Wild Boars at full grown state, can range anywhere from 200 lbs. to over 700 lbs.

Where: The WILD! Although they are native to the forests of Europe, Northern Africa, and Asia, they have been artificially introduced in the Americas and Australaisa, where they are now regarded as both an important food resource and an environmental threat. But with over 2 million in Texas alone, it seems like these wild boar go anywhere and everywhere they can get to. With a wild sow (female) reaching a breeding age at a mere 7-8 months, one sow can be responsible for over 1,000 feral hogs in a mere 5 years. Keeping that kind of population growth in check is not so easy. They are known to eat up backyards, gardens, crop fields, forests, and whatever else they’d like.

When: Our wild caught boar are obtained in a number of ways nowadays. From some trusty ol’ places that we’ve traced, scouted, and known for years, to a phone call from a customer, or you, who is fed up with a few wild boar that eat an entire garden for a late night snack. We get boar when we can.

Why: You’re looking for some big game meat with a sweet (not as ‘sweet’ as domestic pig), nutty, and intense flavor and a very high protein content. One of the most significant benefits of having wild boar meat is that it is known to produce white blood cells, thus enhancing your immune system.